Older men in Cardiff who have time to spare will soon have a place to regularly work on projects and activities which interest them.

Since the Men’s Shed in North Cardiff began three months ago, the group’s ten members have been meeting at a room in Rhiwbina Church every Wednesday afternoon.

They hope to gain new members, meet more frequently and get their hands dirty working on projects such as model making and gardening. The group, called ‘The Den,’ have their eyes set on moving into a garage nearby. But The Den isn’t the first Men’s Shed of its kind. 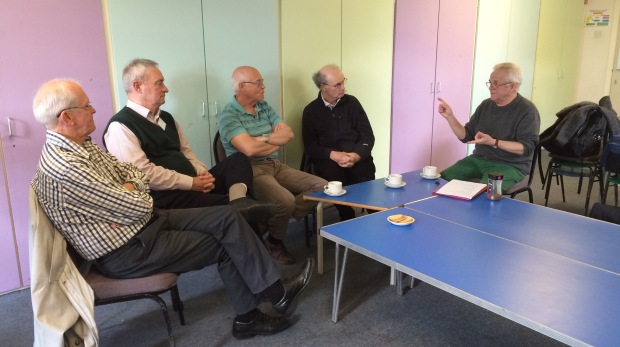 Members of North Cardiff’s ‘Men’s Shed’ in their temporary location.

What is a Men’s Shed?

“Men’s Sheds is a way for men to pursue their interests, develop new ones, feel useful and have a sense of belonging,” says Mike Wright, one of The Den’s organizers.

“It originated in Australia and now there are twenty in Wales alone, a number Men’s Sheds Cymru expects to double in two years.”

The Den’s new ‘Shed’ will likely be the garage at Beulah Church. Photo: Mike Wright

A common misconception is that every Men’s Shed involves some sort of handiwork. But the activities The Den are interested in pursuing involve ancestry and inventions, in addition to model making.

According to a 2014 survey by Age UK, more than 1 million people over the age of 65 in the UK are often or always lonely.

Mr. Wright says: “Studies show that social isolation and loneliness within the community is particularly prevalent among men.”

Keith Farmer is a one of The Den’s members. “You can get a bit insular staying at home doing your own thing. So it’s nice to get out and meet other people,” says Farmer.

Gill Saunders is the founder of a charity called FAN that encourages friendship among strangers through informal discussions. She has seen with her own eyes how people can feel sick with loneliness.

Gill Saunders has been volunteering for many years with people who say they’re lonely.

“I think groups like Men’s Sheds are desperately important. But more importantly, the elderly don’t want to be the elderly,” says Saunders. “They want to be part of society.”

This article was originally published on 14 April 2016 at Cardiff News Plus.